The last few weeks have been very tough. I journaled feverously last week about everything with the intention of posting on the blog but it ended up too dark, and too personal to completely expose in a public internet space and especially back to myself, at least for the time being. Having said that I have used edited snippets of one of the journals in this post. I didn’t cook much during the past few weeks given the circumstances but I did manage to cook two things of note. I barely had the energy to make anything, yet I felt better after losing myself in the present of cooking. Clearly, cooking can have therapeutic benefits. I made Graf and Bread. Both incredibly simple foods, yet they were so comforting to eat that I was allowed an escape back to a safe and nurturing space even if only for a short while. The power of food never ceases to amaze me.

I got home tonight and downed a glass of cheap Malbec (which is not my usual jam), paired it with no name triscuits, pickles, and delicious yet overpriced Irish cheddar found in the back of the drawer for a snack much better than I’d hoped for. Now that I’ve stuffed my ravenous face I’m making graf. It is comfort food. I am functioning well because I managed to plan a meal in advance as beans require soaking overnight. My heart feels numb. My kitchen is a disaster.

What is graf? I don’t know how to spell it. It is a bean stew my Macedonian side of the family makes. My uncle, via text a few days earlier, trying to distract me asks me how I make it. He jokes about how his friend Wray always makes it WRONG, though he is only partly joking. This is because the steps are simple but they matter. My uncle doesn’t add the onions and pepper until the end of the cook. Salt cannot be added till the end unless with the soaking water as the beans will not soften. I cannot take that many steps today as it feels monumental to throw a bunch of shit in the pressure cooker… and as it’s all going in a pressure cooker it will be ok.

I vaguely remember that Graf is also eaten at Easter and at funerals with lightly floured and pan-fried white fish which I have not eaten since I was a kid. I am realizing as I type this that it is/was orthodox Easter?… a nurse mentioned her lamb dinner with family in the elevator today to a colleague. I said Christos (pronounced Ristos) anesti to my cousin and she chuckled, we are third generation and don’t keep up with religion or most traditions, or even in contact with most of the family. Somehow though I still feel sentimental about graf right now which is why I’m going to make it and eat it, accompanied with 2 more glasses of cheap Malbecmedication. Did I mention that I don’t usually like Malbec? Why do I even have this wine? It has been sitting around my apartment for a while. I have no energy to make a salad. I don’t know how but finally at 10 pm It is the best graf I have ever made; the beans are creamy and the flavours have melded together. 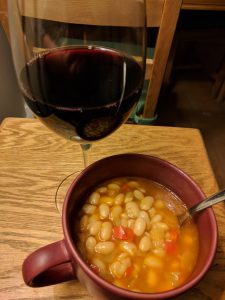 *There is also an oven baked version that gets very thick as opposed to soup like which is covered in dry mint and chili flakes.

“A loaf of bread is something new added to the world, an edged object rested from the flux of nature-and specifically from the living, shifting, Dionysian swamp that is dough”. Pollan 248

As mentioned above bread for me is comfort food. This is true for many people across the globe and throughout history. Bread is one of those things like campfire which seem to be located somewhere deep in our DNA. Bread is a considered by many as a transformational food. It is the perfect analogy for Christians to use as a symbol for the body of Christ as bread starts as alive as wheat, dies in the harvest and then is resurrected again with an inoculation of yeast as a leavening agent. Of course, the bread ‘dies’ again one more time as the yeast is used up and then finally the product is transformed in the oven (which might not work so well for the end of analogy? lol)

Through the invention of food factory technologies, bread production became vastly different then how people had been making it for most of human history. I don’t recall ever having wonder bread in the house growing up, though I had eaten it somewhere, I preferred ‘crusty bread’ as I called it, white or whole wheat loaves that my family purchased from a local Italian bakery. Thankfully there is a breadvolution happening these days, yet it is still hard to find bakeries still using traditional methods. Why does this matter if the bread tastes good? It can matter because in traditional bread making the sourdough method relies on a culture of yeasts and bacteria which break down parts of the bread and change its structure allowing us to digest and access its nutrients better. Studies have also revealed that the sourdough method mitigates a number of the peptides which are known to cause gluten intolerance, and there is a lot of speculation that the rise of gluten intolerance and celiac disease is a result of the commercial bread ingredients and methods using quick acting yeasts, dough conditioners, sugars etc.[i]

I wasn’t just inspired to make bread because I like to eat it. There were two other major determining factors. One is that it is also therapeutic for me to make. Though the sourdough method lacks dough kneading (which is good for picturing your enemies face in the dough while pounding on it) there is something satisfying about the process. From the feeding of the starter and watching it bubble away as the yeasts start to wake up, feed and double in size, to the removal and reveal of the bread from the oven having been wondering if it will rise enough, make a good crust etc? is a very exciting process. It might be the only thing that I am as excited the beauty of physical end product and the process of making it. Usually, I am focused on the latter, though the final, transformed bread is still ephemeral as it is soon eaten. The third reason is that I had to make bread, regardless of how tired I was after reading about Michael Pollan’s Sourdough story in Cooked, a book that has been profoundly inspiring to me to read. Much of what I said in the paragraph above sounds like I am just mirroring what he says in the book, but it is my own experience, and I imagine the fulfillment from the bread making process is experienced similarly by many people. He goes much further with sourdough (and other food research) than I ever have. I am quite lassez-faire about it actually, once I neglected my starter for so long in the fridge that it died! I had to get new culture from my mom’s. She was the one who a few years ago hopped on this sourdough train and then taught my brother and I both how to make it ourselves, which has created a new food tradition in my family. Below are the pictures of the sourdough process from this week’s therapy bread.

This blog is all about having a creative space for me to share my love of cooking and eating by journalling my thoughts, creative/ artistic reflections and responses to food, art, culture, and writing, and showcasing recipes I’ve created and useful tidbits of info that I’ve learned about food over the years.