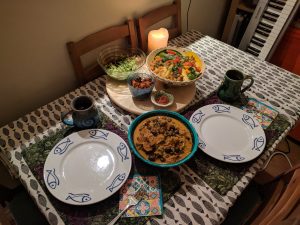 This book is about the life and career of Paula Wolfert, a Cookbook author, and food writer. I was introduced to her work when I first moved to Vancouver. I was working in a specialty culinary shop on Granville Island. Most days were busy full of cleaning and packaging herbs, and spices, restocking shelves and performing cash and customer service however in slow moments I would relish in exploring the cookbook selection. Her books were always ones I went back to as her recipes were unique, full of insight, research history and stories of the people and cultures that the recipes were representing. The book is very warmly written and separated into sections that represent different stages of her life. After each section is a selection of her recipes that can be made into a meal that represents each time period.

I have connected to Paula’s life in ways I did not expect.  The first connection relates to her roots. Her family was eastern European Jews. Her mother apparently didn’t cook but her grandmother did. She has very strong memories of dishes cooked by her grandmother. I was amazed at the dishes she described because they are similar to the food I ate at my grandmother’s house growing up. On my father’s side, my family is Macedonian and I have rarely heard of any of the dishes eaten in my family anywhere else, and here some of them were being described in this book! The peasant food culture in eastern Europe must share similar traditions in different areas. In many parts of the book, Paula refers to the importance of the pepper in her lifelong food quest which began with a childhood favorite dish of hers, Ajvar. Ajvar is a spread made of roasted red peppers, eggplants, can include other vegetables, and a few spices. As a kid, I have fond memories of BBQing, peeling, bagging and freezing bushels upon bushels of hot and sweet red peppers at the end of the summer in my grandmother’s backyard. During the year these peppers were simply defrosted and served as a side dish/condiment, or cooked in a dish my family refers to as a Tava (no idea how to spell this) where the peppers are slowly simmered for an hour or more with fresh tomato and close to the end of the cooking sprinkled with feta cheese. If a fuller meal is desired an egg can be added. A Tava, or roasted peppers, feta, olives, and bread was present at every meal at my grandmother’s house. In that sense, Paula and I have similar food foundations.

I knew lots about Paula’s food interests and career but was very surprised to read that Paula was a member of beatnik circles living both in New York and Morroco. When reading about beats you hear about the connections between writers, musicians, and artists a lot but not much about their relationships to cooks or food. Paula provided a bit of a missing link in that sense as some of her stories connected food to the beat culture. Apparently, she catered a party attended by Jack Kerouac once where he told her ‘nice legs’, she wasn’t sure if he referred to hers or to the shrimps she was preparing. As time progressed she seemed to always manage to have a close circle of well-known artistic and later foodie friends surrounding her at different stages in her life, however though she gained quite a bit of recognition she is still more well known by serious ‘food people’, and is not a household name like some other writers and chefs of her caliber.

What most impresses me about her is her dedication and passion to researching the stories of the people and the food she writes about. She would go into people’s homes, develop relationships with them, cook with them and get permission to perfect and then publish their recipes.She was always interested in the small details that make a dish exceptional. I am further inspired by the fact she was able to build a successful food writing career in the sixties at a time where it was difficult for women to build professions, and for a large period of this did it as a single mother. It’s amazing to think she was able to travel, write, research, and care for and financially support her children. On the other hand, most of the other parts of her life feel like a dream. She was able to travel at will, write articles and books on whatever she felt creatively compelled to do with the financial support of major publishers. It is these parts of her life, the celebrity aspects, that I have no frame of reference to connect to. However, one of my goals in life is to travel and experience different places, cultures and their food. I have only travelled to a few places so far in my life, the first time I was on a plane (besides being a baby) was at 25 so I’m thinking ahead to my upcoming trip to Merida, one I have dreamed about for the last 6 years in which I will aim to take on a Paula Wolfbertesque spirit of curiosity and discovery.

Paula now has Alzheimer’s, so the last section of the book deals with the connection between food, memory, and self-identity, which was unintentionally the perfect transition into the rest of the readings for my course. This part of the book was very emotional though not framed as a struggle but as a challenge that Paula has passionately taken on. The use of recipes and particular dishes as life markers also resonates conceptually as a creative outlet with some of the connections I want to make between food and Fluxus. I decided for my creative reflection of this reading to cook a meal from this book, I chose the ‘Madame couscous’ chapter where I vegetarianzied the Moroccan feast: Eggplant Zaalouk, Grated Cucumber Salad with oregano, Seitan M’Chermel, Berber couscous for spring, and poached pears with dried fruits.

This meal took about 6 hours to prepare in total from start to finish. It was a ton of prep cutting and organizing all the vegetables, and organizing the prep space in my tiny kitchen to cook all the dishes was a challenge. I had to cook some dishes before others as I didn’t have the burner space or the octopus arms needed to cook them all at once. I had never prepared couscous in the traditional 3x steaming method before which was a bit time consuming, and challenging considering I needed to makeshift a steamer with my pasta pot and aluminum foil. The results, however, were amazing in a number of ways. The meal was more than delicious, it was outstanding. Additionally for the first time in I’d say a year or more I spent an afternoon puttering and experimenting in the kitchen. I’ve been so busy with my responsibilities that my cooking for me has become very quick and purposeful. I used to dedicate free time to learning new techniques and playing around with ingredients so it was very stress relieving and fulfilling to be able to engage with cooking for an afternoon/evening in the way that I love to. The meditative, reflective, problem solving, and engaging aspects of cooking requires time and it is in this style of cooking when it becomes a soul feeding activity. I hope to continue on in this spirit for the rest of the course.

This blog is all about having a creative space for me to share my love of cooking and eating by journalling my thoughts, creative/ artistic reflections and responses to food, art, culture, and writing, and showcasing recipes I’ve created and useful tidbits of info that I’ve learned about food over the years.